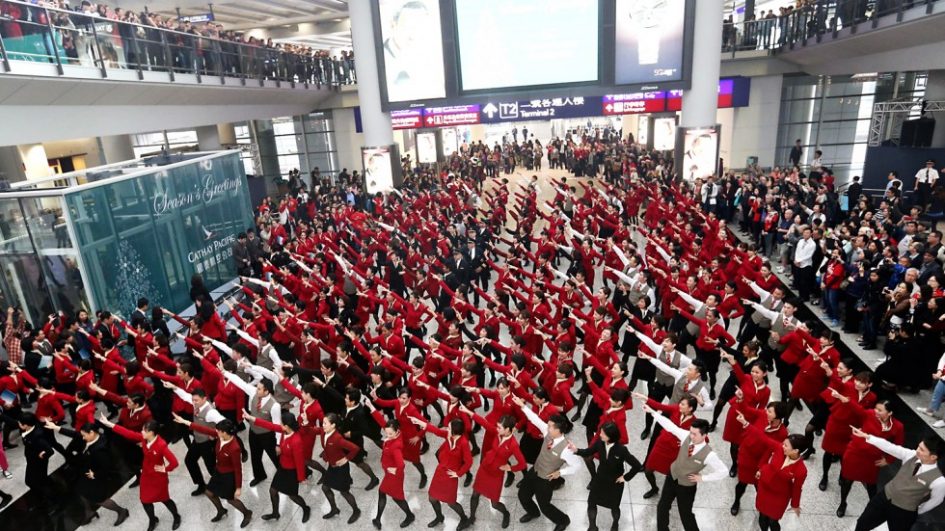 A flash mob is a group of people who give a choreographed but unannounced performance in a public space. There are lots of different flash mob styles, from pure entertainment to advertising to tributes to political protests.

Here are some of the most well-known flash mobs of all time:

In January of 2009, the crowd at Liverpool Street Station suddenly broke into song and dance as 400 tourists and staff members showed off their hip-hop, disco and ballroom moves. The flash performance was so outrageous and fun that T-Mobile decided to use it for an advertising campaign.

The inmates of a Philippine prison in Cebu banded together to shoot a flash mob dance routine set to Michael Jackson’s Thriller. The act actually became a tourist attraction as visitors flocked to watch the 1,500 inmates perform. The event even inspired a movie titled “Dance of the Steel Bars” a story about redemption behind prison walls.

Perhaps one of the most unusual flash mobs is the viral videos of pregnant women breakdancing in capital cities across the world. The videos were made with the goal of bringing to attention the dangers of giving birth in developing nations and the lack of healthcare pregnant women are receiving in poorer nations.

With 21.5 million YouTube views, the flash mob of Grand Central Station where all the participants are going about their business and then suddenly freeze in position at the same time took the internet by storm. About 200 people are estimated to have participated in this fun spin on the flash mob.

Shoppers in a Berlin shopping mall were delighted by the 1,000 strong orchestra (50 of which were members of the German Symphony Orchestra) who played classical works while shoppers marveled in wonder.

Whoever looked forward to Christmas time when they were a child because it meant getting to watch The Sound of Music multiple times would love the flash mob that went down in Antwerp. Riffing on the classic “Do Re Mi” tune sung in the film, a group of 200 broke out into song and dance. The performance was actually an ad for a T.V. show in Belgium which was auditioning for lead roles in The Sound of Music.

The Black-Eyed Peas performing on Oprah was exciting enough. But imagine Oprah’s surprise when the audience stood up and began a coordinated dance routine to their hit song “I Got a Feeling.”

Students, professors and staff members of Ohio State University went viral with their flash mob performance to “Don’t Stop Believing”. This flash mob starts with the classic beginning of one dancer performing to the music that then spreads to hundreds of choreographed participants.

The sheer size of this flash mob made it a hit on YouTube and earned it a Guiness Book World Record for largest flash mob with nearly 14,000 people performing the choreography of Michael Jackson’s Thriller.

An all-girls flash mob to the hit “Single Ladies” made waves in London’s Piccadilly Circus where 100 women performed a spectacular choreographed dance.

Perhaps the most controversial of advertising ploys, stealth marketing is an all too common occurrence in modern life. Some studies...